Social Commerce is the NEXT BIG THING. 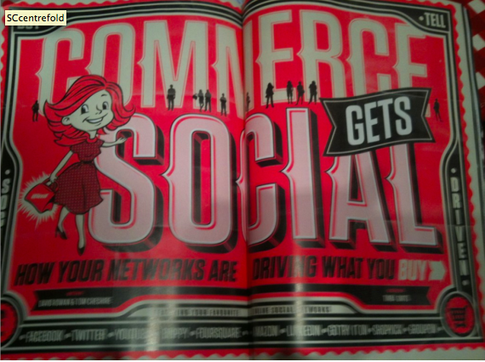 via Paul Marsden at SocialCommerceToday

Social Commerce along with Social Search and Social Mobile are 3 of
my big investment buckets (I invested in Aardvark, Milo.com in 2 of those categories). There’s an epic Wired UK cover story on Social Commerce. You must get the hard copy. I got a couple cool quotes in:

“I call it people rank, as opposed to [Google’s] PageRank. Just as PageRank gives more weight to a page with more authority, we can now identify the most inﬂuential people in a space. Traditional marketing? It’s dead. It’s real-time social marketing and commerce that really matter now. There will be multibillion companies in the social commerce space. We’re where we were with social gaming two or three years ago…It’s about ego, sharing your status and accomplishments, a quest for positive validation”

Great quotes from Mark Zuckerberg, Reid Garrett Hoffman,  Christian Hernandez, Andrew Mason, Bing Gordon and Michael Lazerow. See link at bottom. I’m so excited about the next great social commerce companies being built. I really believe that at least one entrepreneur can built the Social Amazon of our generation.

On the potential for social commerce:

On the rationale for social commerce

1 Response to Social Commerce is the NEXT BIG THING.