Tired of getting dissed by recruiters? Let’s be real…sending out resumes and cover letters are just no longer an effective strategy, particularly when attempting to land a position in social media or IT. Depending on the organization, getting noticed may vary from difficult to nearly impossible. Leveraging your digital assets is essential, but what can you do to really capture some immediate attention? Here’s something to consider…

BO.LT is a platform that allows you to easily manipulate the look and feel of any website. Recently opened to the public last week, expect to hear plenty about it shortly. With some very basic coding skills and a little creativity, you can get your remix on and share it with the world in a matter of minutes.

A potentially dangerous weapon if put in the wrong hands, BO.LT may create some serious rumors and copyright infringement issues with its current functionality. However, let’s focus on a more practical use case: landing a job.

Being a huge supporter of Gary Vaynerchuck, I have engaged with him on Twitter numerous times and only received a response once or twice. Am I offended? Of course not, but it did motivate me to find another way to grab his attention. After seeing that his firm Vayner Media was hiring, I thought I would put BO.LT to the test.

With a little Photoshop magic and some minor tweaking of the code, here is the final product: REMIX (screenshot below) 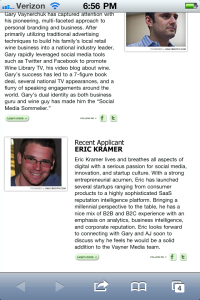 The simplicity of the BO.LT platform is extremely impressive and everything seems to display properly on mobile devices. Whether or not this is an effective way to get your foot in the door is still up in the air.

What do you think about BO.LT and how do you plan on using it?